Alexander the Great at War: His army – His battles – His Enemies

Alexander was arguably the greatest military commander ever. Upon the assassination of his father King Philip II of Macedon in the summer of 336 BC, he took over the reins of power of a now united Greece. Two years later he led his combined Macedonian and Greek army into Asia and began the greatest military conquest in world history. In eleven short years and an extraordinary sequence of marches, battles and sieges, he overcame the might of the Persian Empire and campaigned across deserts, plains and forests as far as the Indian subcontinent to become master of most of the known world, at least on the battlefield. He died in Babylon at the age of 33

This richly illustrated book examines all of Alexander’s incredible campaigns, describing in detail his armies and the armies he defeated as he created his enormous empire, and explains the extraordinary generalship and tactics that won him his victories. Numerous maps and photographs, and full-color artwork reconstructions and 3-D “bird’s-eye views” of battles combine with authoritative text to relive one of history’s most epic military adventures. 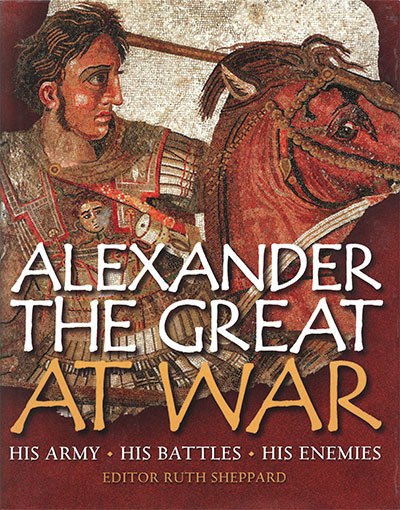 Alexander the Great at War: His army – His battles – His Enemies