Christopher Scarre
The Seventy Wonders of the Ancient World: The Great Monuments and How They Were Built

How were the ancient wonders of the world built? How many people did it take to build the Great Wall of China and the Sphinx at Giza? This text seeks to answer such questions, examining these spectacular feats of engineering and celebrating the achievements of the builders who worked without the aid of modern technology.

Expanding on the theme of the traditional Seven Wonders, the book broadens the scope to incorporate marvels from around the globe, spanning the centuries from the first standing stones of the fifth millennium BC to the Great Temple of the Aztecs in the 16th century AD.

The raising of the stones at Stonehenge, the erection of Egyptian obelisks, the building of Roman roads and the laying out of the Nazca Lines on the face of the Peruvian Desert are all described and explained in the light of archaeological research. The text also features factfiles, diagrams, photographs and perspective views. 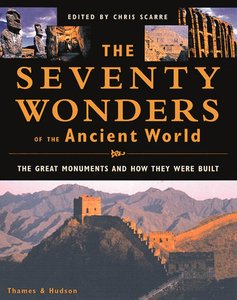 Christopher Scarre
The Seventy Wonders of the Ancient World: The Great Monuments and How They Were Built