Shiba Ryotaro
Clouds above the Hill: A Historical Novel of the Russo-Japanese War,
Volume 1 to 4

The Russo-Japanese War of 1904-5 is central to Shiba’s story. The main characters are two Japanese brothers, Akiyama Yoshifuru, the father of the Japanese cavalry, and Akiyama Saneyuki, a gifted naval strategist, who set out to prove their military prowess and patriotism. Military history buffs are in for a treat. The novel depicts in detail what it was like to plan and fight with the Japanese Army amidst the bitter snows of Manchuria, and how the Imperial Navy confronted and sank the pride of the Russian Baltic Fleet.

Volume I describes the growth of Japan’s fledgling Meiji state, a major “character” in the novel. We are also introduced to our three heroes, born into obscurity, the brothers Akiyama Yoshifuru and Akiyama Saneyuki, who will go on to play important roles in the Japanese Army and Navy, and the poet Masaoka Shiki, who will spend much of his short life trying to establish the haiku as a respected poetic form.

In Volume II, Meiji Japan is on a collision course with Russia, as Russian troops stationed in Manchuria ignore repeated calls to withdraw. Admiral Tōgō leads a blockade and subsequent skirmish at the strategically vital and heavily fortified Port Arthur, whilst Yoshifuru’s cavalry in Manchuria maneuvers for position as it approaches the Russian Army lines. The two armies clash at the battle of Liaoyang, where Japan seals a victory which shocks the world.

Volume III finds Admiral Tōgō continuing his blockade of Port Arthur. Meanwhile, a Japanese land offensive gains control of the high ground overlooking the bay as the Russians at last call for a ceasefire. However, on the banks of the Shaho River, the Japanese lines are stretched, but the Russian General Kuropatkin makes a decision to flank the troops to the left and in doing so encounters Akiyama Yoshifuru’s cavalry.

Volume IV begins with the dramatic battle of Mukden where Akiyama Yoshifuru’s cavalry play a major part in the action against the Cossacks. Meanwhile, Admiral Tōgō’s fleet sail to the Tsushima strait to intercept the Baltic Fleet en route to Vladivostok. With the help of Akiyama Saneyuki’s strategies, the Baltic Fleet is totally destroyed and the Japanese fleet make a triumphant return to Yokohama. 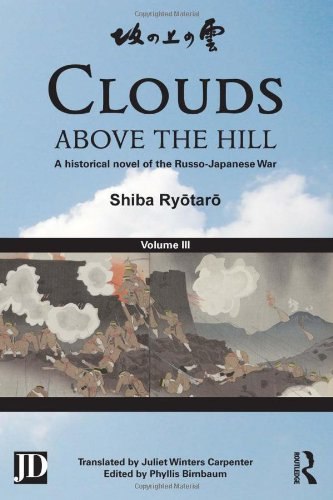 Shiba Ryotaro
Clouds above the Hill: A Historical Novel of the Russo-Japanese War,
Volume 1 to 4