1.
John Horgan
The End Of Science: Facing The Limits Of Knowledge In The Twilight Of The Scientific Age

In The End of Science, John Horgan makes the case that the era of truly profound scientific revelations about the universe and our place in it is over. Interviewing scientific luminaries such as Stephen Hawking, Francis Crick, and Richard Dawkins, he demonstrates that all the big questions that can be answered have been answered, as science bumps up against fundamental limits. The world cannot give us a “theory of everything,” and modern endeavors such as string theory are “ironic” and “theological” in nature, not scientific, because they are impossible to confirm. Horgan’s argument was controversial in 1996, and it remains so today, still firing up debates in labs and on the internet, not least because–as Horgan details in a lengthy new introduction–ironic science is more prevalent than ever. Still, while Horgan offers his critique, grounded in the thinking of the world’s leading researchers, he offers homage, too. If science is ending, he maintains, it is only because it has done its work so well

2.
Roberto Mangabeira Unger
The Singular Universe and the Reality of Time: A Proposal in Natural Philosophy

Cosmology is in crisis. The more we discover, the more puzzling the universe appears to be. How and why are the laws of nature what they are? A philosopher and a physicist, world-renowned for their radical ideas in their fields, argue for a revolution. To keep cosmology scientific, we must replace the old view in which the universe is governed by immutable laws by a new one in which laws evolve. Then we can hope to explain them. The revolution that Roberto Mangabeira Unger and Lee Smolin propose relies on three central ideas. There is only one universe at a time. Time is real: everything in the structure and regularities of nature changes sooner or later. Mathematics, which has trouble with time, is not the oracle of nature and the prophet of science; it is simply a tool with great power and immense limitations. The argument is readily accessible to non-scientists as well as to the physicists and cosmologists whom it challenges.

The Polish writer Stanislaw Lem is best known to English-speaking readers as the author of the 1961 science fiction novel Solaris, adapted into a meditative film by Andrei Tarkovsky in 1972 and remade in 2002 by Steven Soderbergh. Throughout his writings, comprising dozens of science fiction novels and short stories, Lem offered deeply philosophical and bitingly satirical reflections on the limitations of both science and humanity.

In Summa Technologiae—his major work of nonfiction, first published in 1964 and now available in English for the first time—Lem produced an engaging and caustically logical philosophical treatise about human and nonhuman life in its past, present, and future forms. After five decades Summa Technologiae has lost none of its intellectual or critical significance. Indeed, many of Lem’s conjectures about future technologies have now come true: from artificial intelligence, bionics, and nanotechnology to the dangers of information overload, the concept underlying Internet search engines, and the idea of virtual reality. More important for its continued relevance, however, is Lem’s rigorous investigation into the parallel development of biological and technical evolution and his conclusion that technology will outlive humanity.

Preceding Richard Dawkins’s understanding of evolution as a blind watchmaker by more than two decades, Lem posits evolution as opportunistic, shortsighted, extravagant, and illogical. Strikingly original and still timely, Summa Technologiae resonates with a wide range of contemporary debates about information and new media, the life sciences, and the emerging relationship between technology and humanity.

4.
Alain Badiou
The Concept of Model: An Introduction to the Materialist Epistemology of Mathematics

The Concept of Model is the first of Alain Badiou’s early books to be translated fully into English. With this publication English readers finally have access to a crucial work by one of the world’s greatest living philosophers. Written on the eve of the events of May 1968, The Concept of Model provides a solid mathematical basis for a rationalist materialism. Badiou’s concept of model distinguishes itself from both logical positivism and empiricism by introducing a new form of break into the hitherto implicated realms of science and ideology, and establishing a new way to understand their disjunctive relation. Readers coming to Badiou for the first time will be struck by the clarity and force of his presentation, and the key place that The Concept of Model enjoys in the overall development of Badiou’s thought will enable readers already familiar with his work to discern the lineaments of his later radical developments. This translation is accompanied by a stunning new interview with Badiou in which he elaborates on the connections between his early and most recent thought. “This book is indispensable for those seeking to understand Alain Badiou’s philosophical project, and for anyone interested in investigating real points of contact between the analytic and continental traditions.” – Ray Brassier, Middlesex University

5.
David B. Allison
Reading the New Nietzsche
“The Birth of Tragedy”, “The Gay Science”, “Thus Spoke Zarathustra” and “On the Genealogy of Morals

Reading the New Nietzsche is devoted to a comprehensive analysis of the four most important ad widely read of Nietzsche’s works. After a largely biographical introduction, a chapter is devoted to each work. Read in succession they give an overall philosophical account of Nietzsche’s thought. 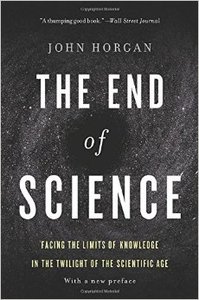 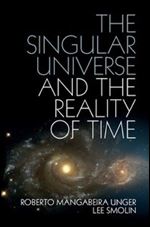 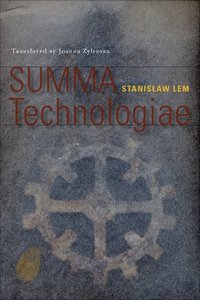 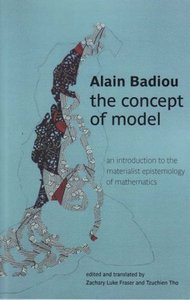 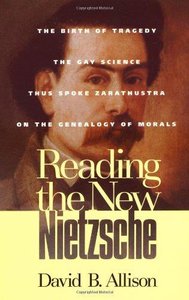