The last couple of years have seen the eurozone lurch from crisis to calamity. With Greece, Portugal and Ireland already driven to the brink of economic catastrophe, and the threat that a number of other EU countries are soon to follow, the consequences for the global economy are potentially dire. In The Great Eurozone Disaster, Heikki Patomäki dissects the current crisis, revealing its origins lie in the instability that has driven the process of financialisation since the early 1970s. Furthermore, the public debt crises in the European deficit countries have been aggravated rather than alleviated by the responses of the Commission and leaders of the surplus countries, especially Germany.

Providing a captivating narrative about how Europe ended up in its present predicament, Patomäki presents a radical new vision for ‘global economic democracy’ as the only viable way out of the current crisis.

2.
Jonathan Gottschall
The Professor in the Cage: Why Men Fight and Why We Like to Watch

When a mixed martial arts (MMA) gym moves in across the street from his office, Jonathan Gottschall sees a challenge, and an opportunity. Pushing forty, out of shape, and disenchanted with his job as an adjunct English professor, part of him yearns to cross the street and join up. The other part is terrified. Gottschall eventually works up his nerve, and starts training for a real cage fight. He’s fighting not only as a personal test but also to answer questions that have intrigued him for years: Why do men fight? And why do so many seemingly decent people like to watch?

In The Professor in the Cage, Gottschall’s unlikely journey from the college classroom to the fighting cage drives an important new investigation into the science and history of violence. Mixed martial arts is a full-contact hybrid sport in which fighters punch, choke, and kick each other into submission. MMA requires intense strength, endurance, and skill; the fights are bloody, brutal, and dangerous. Yet throughout the last decade, cage fighting has evolved from a small-time fringe spectacle banned in many states to the fastest-growing spectator sport in America. 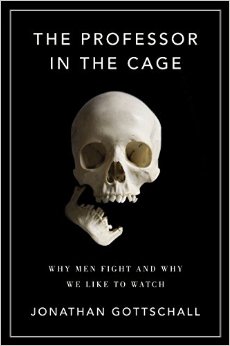