Maya codices (singular codex) are folding books stemming from the pre-Columbian Maya civilization, written in Maya hieroglyphic script on Mesoamerican bark cloth, made from the inner bark of certain trees, the main being the wild fig tree or amate (Ficus glabrata). Paper, generally known by the Nahuatl word āmatl, was named by the Mayas huun. The folding books are the products of professional scribes working under the patronage of deities such as the Tonsured Maize God and the Howler Monkey Gods. The Maya developed their huun-paper around the 5th century, which is roughly the same time that the codex became predominant over the scroll in the Roman world. However, Maya paper was more durable and a better writing surface than papyrus. The codices have been named for the cities where they eventually settled. The Dresden codex is generally considered the most important of the few that survive.

Our knowledge of ancient Maya thought must represent only a tiny fraction of the whole picture, for of the thousands of books in which the full extent of their learning and ritual was recorded, only four have survived to modern times (as though all that posterity knew of ourselves were to be based upon three prayer books and Pilgrim’s Progress).
—Michael D. Coe

There are only three codices whose authenticity is beyond doubt. These are:

The authenticity of the so-called Grolier Codex, also known as the Grolier Fragment, is disputed. 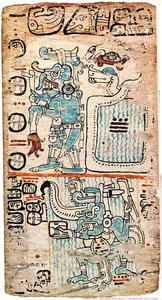