1.
Vyvyan Evans
The Language Myth: Why Language Is Not an Instinct

Language is central to our lives, the cultural tool that arguably sets us apart from other species. Some scientists have argued that language is innate, a type of unique human ‘instinct’ pre-programmed in us from birth. In this book, Vyvyan Evans argues that this received wisdom is, in fact, a myth. Debunking the notion of a language ‘instinct’, Evans demonstrates that language is related to other animal forms of communication; that languages exhibit staggering diversity; that we learn our mother tongue drawing on general properties and abilities of the human mind, rather than an inborn ‘universal’ grammar; that language is not autonomous but is closely related to other aspects of our mental lives; and that, ultimately, language and the mind reflect and draw upon the way we interact with others in the world. Compellingly written and drawing on cutting-edge research, The Language Myth sets out a forceful alternative to the received wisdom, showing how language and the mind really work.

2.
Laurence N. De Looze
The Letter and the Cosmos: How the Alphabet Has Shaped the Western View of the World

From our first ABCs to the Book of Revelation’s statement that Jesus is “the Alpha and Omega,” we see the world through our letters. More than just a way of writing, the alphabet is a powerful concept that has shaped Western civilization and our daily lives.

In The Letter and the Cosmos, Laurence de Looze probes that influence, showing how the alphabet has served as a lens through which we conceptualize the world and how the world, and sometimes the whole cosmos, has been perceived as a kind of alphabet itself. Beginning with the ancient Greeks, he traces the use of alphabetic letters and their significance from Plato to postmodernism, offering a fascinating tour through Western history.

A sharp and entertaining examination of how languages, letterforms, orthography, and writing tools have reflected our hidden obsession with the alphabet, The Letter and the Cosmos is illustrated with copious examples of the visual and linguistic phenomena which de Looze describes. Read it, and you’ll never look at the alphabet the same way again.

Talking Donald Trump examines the language of Donald Trump’s presidential campaign from the perspective of sociocultural linguistics. This book offers an insight into the many stages of Trump’s political career, from his initial campaign for the Republican nomination, up to his presidency. Drawing from speeches, debates, and interviews, as well as parodies and public reactions to his language, Sclafani explores how Trump’s language has produced such polarized reactions among the electorate. In analysing the linguistic construction of Donald Trump’s political identity, Sclafani’s incisive study sheds light on the discursive construction of political identity and the conflicting language ideologies associated with the discourse of leadership in modern US society. Talking Donald Trump provides a crucial contemporary example of the interaction between sociolinguistics and political science, and is key reading for advanced students and researchers in the fields of sociolinguistics, language and politics, communication studies and rhetoric.

4.
DK
Remarkable Books: The World’s Most Beautiful and Historic Works

A beautifully illustrated guide to more than 75 of the world’s most celebrated, rare, and seminal books and handwritten manuscripts ever produced, with discussions of their purpose, features, and creators.

From ancient masterpieces such as The Art of War, written on the leaves of bamboo, to the stunningly illustrated Birds of America, to Chairman Mao’s Little Red Book, Remarkable Books delves into the stories behind the most incredible tomes ever produced, offering an insight into their wider social and cultural context, and is chronologically ordered to demonstrate the synergies between the growth in human knowledge and the bookmaking process. Alongside breathtaking images of the books and manuscripts themselves, close-up views draw out interesting features, which are discussed in greater detail, while biographies tell the lives of the people who produced them.

This coffee table–worthy book is wrapped in a textured jacket with gold foil, making it a great gift for those with an interest in literature and art and design.

Spanish language classes now have a reference source to encourage critical thinking and debate important, current topics in Spain, Mexico, and the rest of Latin and South America. Issues in the Spanish-Speaking World offers 14 original and engaging chapters, each introducing a major issue in the headlines and providing pro and con positions for student debate, papers, and class presentations.
Highlights include the Basque question, indigenous rights, the Christopher Columbus controversy, bullfighting, and the war on drugs in Colombia. Each chapter concludes with a Resource Guide and useful vocabulary to facilitate expression in Spanish. 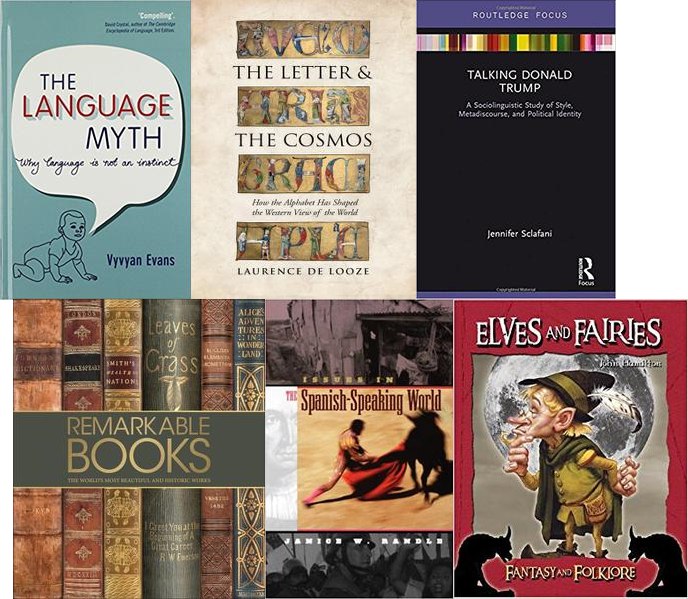