Like its Slavic counterpart (2008), the Etymological Dictionary of the Baltic Inherited Lexicon aims at combining recent insights from comparative Indo-European linguistics with modern Balto-Slavic accentology. While the Lithuanian lexicon serves as a starting-point, the dictionary contains a number of etyma that are unique to Latvian or Old Prussian. Unlike in most other Baltic etymological studies, both Latvian and Lithuanian accentual data feature prominently. The author’s renewed attempt to reconstruct part of the Balto-Slavic lexicon has resulted in numerous additions and corrections. The introductory chapter explains the structure of the dictionary and clarifies its theoretical framework. In addition, it provides a concise introduction to Baltic historical linguistics. The volume concludes with an extensive bibliography and a word index.

This comparative and etymological dictionary of the more than fifty languages traditionally classified as Altaic is arguably the most comprehensive, systematic work as yet on the subject. Subdivided into five branches: Turkic, Mongolian, Tungus-Manchu, Korean and Japanese, it deals with the entire Altaic family. The introduction contains a detailed account of the phonetic correspondences between Altaic languages, as well as their morphological and lexical characteristics. The body of the dictionary presents almost 3000 lexical matches between different subgroups of Altaic, with Proto-Altaic reconstructions and detailed reflexes in ancient and modern languages. Wherever possible comments are given to distinguish between inherited vocabulary and various later interlingual borrowings. With detailed indices for each language. A true reference work of great importance.

This is the first etymological dictionary of Proto-Celtic to be published after a hundred years, synthesizing the work of several generations of Celtic scholars. It contains a reconstructed lexicon of Proto-Celtic with ca. 1500 entries. The principal lemmata are alphabetically arranged words reconstructed for Proto-Celtic. Each lemma contains the reflexes of the Proto-Celtic words in the individual Celtic languages, the Proto-Indo-European (PIE) roots from which they developed, as well as the cognate forms from other Indo-European languages. The focus is on the development of forms from PIE to Proto-Celtic, but histories of individual words are explained in detail, and each lemma is accompanied by an extensive bibliography. The introduction contains an overview of the phonological developments from PIE to Proto-Celtic, and the volume includes an appendix treating the probable loanwords from unknown non-IE substrates in Proto-Celtic.

This etymological dictionary gives the origins of some 20,000 items from the modern English vocabulary, discussing them in groups that make clear the connections between words derived by a variety of routes from originally common stock.

As well as giving the answers to questions about the derivation of individual words, it is a fascinating book to browse through, and includes extensive lists of prefixes, suffixes, and elements used in the creation of new vocabulary.

Germanic is one of the best studied branches of the Indo-European language family. This new etymological dictionary offers a wealth of material collected from both old and new Germanic languages, ranging from Gothic to Modern Faroese, from Old English to the Swiss dialects. It covers the largest part of the Proto-Germanic lexicon, containing around 7,000 lexemes. A large number of words for the first time receive an Indo-European reconstruction, and, as a result, the dictionary offers a full implementation of the laryngeal theory. Special focus is further put on the internal evolution of Germanic morphology and its consequences for the study of Germanic etymology.

This volume is a compendium of Albanian etymology tracing thousands of modern Albanian words back to their origins. It contains detailed information on the Indo-European vocabulary preserved in Albanian as well as on numerous loanwords coming from ancient Greek, Latin, early Romance and Slavic. The ancient elements of the Albanian vocabulary are used for the reconstruction of their Proto-Albanian origin and then compared with their Indo-European parallels. The history of Indo-European words and of early loanwords in Albanian shows the history and culture of the Albanian people reflected in the etymology of the Albanian language. The book also includes a short sketch of Albanian historical phonetics and a bibliography. Every entry is documented and contains earlier etymological explanations and interpretations.

This work gives a critical survey of all verbs attested in Proto-Iranian based on its descendants. It is accompanied by a critical analysis of the morphology and provenance.

8.
Ernest Klein
A Comprehensive Etymological Dictionary of the Hebrew Language for Readers of English

A clear and concise work on the origins of the Hebrew words and their sense development. Each of the c. 32,000 entries is first given in its Hebrew form, then translated into English and analysed etymologically, using Latin transcription for all non-Latin scripts. An indispensable source of biblical, Jewish, modern Hebrew and Near Eastern studies.

As an Indo-European language, Armenian has been the subject of etymological research for over a hundred years. There are many valuable systematic handbooks, studies and surveys on comparative Armenian linguistics. Almost all of these works, with a few exceptions, mostly concentrate on Classical Armenian and touch the dialects only sporadically. Non-literary data taken from Armenian dialects have largely remained outside of the scope of Indo-European etymological considerations. This book provides an up-to-date description of the Indo-European lexical stock of Armenian with systematic inclusion of dialectal data. It incorporates the lexical, phonetic, and morphological material in the Armenian dialects into the etymological treatment of the Indo-European lexicon. In this respect it is completely new. 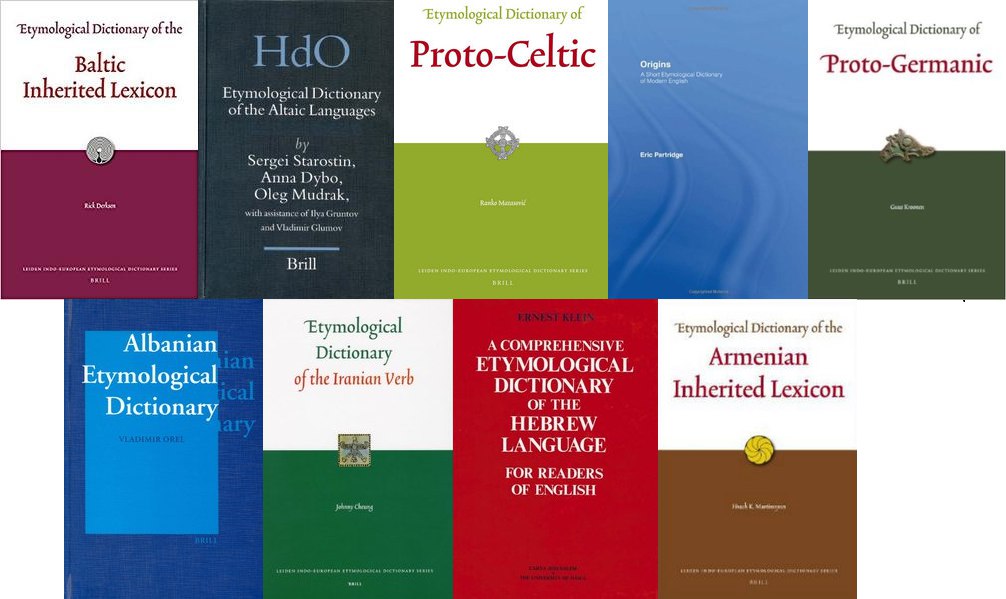