Hawking, Stephen
The Theory of Everything: The Origin and Fate of the Universe

Description: In physicist Stephen Hawking’s brilliant opus, A Brief History of Time, he presented us with a bold new look at our universe, how it began, and how our old views of physics and tired theories about the creation of the universe were no longer relevant. In other words, Hawking gave us a new look at our world, our universe, and ourselves.

Now, Hawking presents an even more comprehensive look at our universe, its creation, and how we see ourselves within it. Imagine sitting in a comfortable room listening to Hawking discuss his latest theories and place them in historical context with science’s other great achievements–it would be like hearing Christopher Columbus deliver the news about the new world.

Hawking presents a series of seven lectures in which he describes, more clearly than ever, the history of the universe as we know it. He begins with the history of ideas about the universe, from Aristotle’s idea that the Earth is round to Hubble’s discovery two millennium later that our universe is growing.

Using this history as a launching pad, Hawking takes us on a fascinating journey through the telescopic lens of modern physics to gain a new glimpse of the universe–the nature of black holes, the space-time continuum, and new information about the origin of the universe. He uses this scientific basis to come up with a “unified theory of everything” that the author claims will be “the ultimate triumph of human reason.” 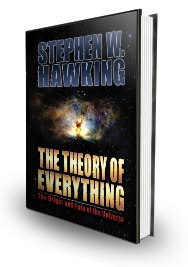 Hawking, Stephen
The Theory of Everything: The Origin and Fate of the Universe