Info: The Republican Party appears to be divided between a tax-cutting old guard and a white-nationalist vanguard―and with Donald Trump’s ascendance, the upstarts seem to be winning. Yet how are we to explain that, under Trump, the plutocrats have gotten almost everything they want, including a huge tax cut for corporations and the wealthy, regulation-killing executive actions, and a legion of business-friendly federal judges? Does the GOP represent “forgotten” Americans? Or does it represent the superrich?

In Let Them Eat Tweets, best-selling political scientists Jacob S. Hacker and Paul Pierson offer a definitive answer: the Republican Party serves its plutocratic masters to a degree without precedent in modern global history. Conservative parties, by their nature, almost always side with the rich. But when faced with popular resistance, they usually make concessions, allowing some policies that benefit the working and middle classes. After all, how can a political party maintain power in a democracy if it serves only the interests of a narrow and wealthy slice of society?

Today’s Republicans have shown the way, doubling down on a truly radical, elite-benefiting economic agenda while at the same time making increasingly incendiary racial and cultural appeals to their almost entirely white base. Telling a forty-year story, Hacker and Pierson demonstrate that since the early 1980s, when inequality started spiking, extreme tax cutting, union busting, and deregulation have gone hand in hand with extreme race-baiting, outrage stoking, and disinformation. Instead of responding to the real challenges facing voters, the Republican Party offers division and distraction―most prominently, in the racist, nativist bile of the president’s Twitter feed.

As Hacker and Pierson argue, Trump isn’t a break with the GOP’s recent past. On the contrary, he embodies its tightening embrace of plutocracy and right-wing extremism―a dynamic Hacker and Pierson call “plutocratic populism.” As Trump and his far-right allies spew hatred and lies, Republicans in Congress and in statehouses attack social programs and funnel more and more money to the top 0.1 percent of Americans. Far from being at war with each other, reactionary plutocrats and right-wing populists have become the two faces of a party that now actively undermines democracy to achieve its goals against the will of the majority of Americans.

Drawing on decades of research, Hacker and Pierson authoritatively explain the doom loop of tax cutting and fearmongering that characterizes our era―and reveal how we can fight back. 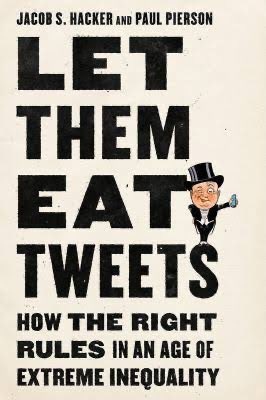