Newsademic is an easy-to-understand international newspaper, written and edited in a style that assists English Language teaching and learning. Newsademic is a fortnightly publication (20 articles) and associated website. Both British and American English versions of the newspaper are available. The easy-to-read newspaper features the top world news stories that have made headlines during the previous two weeks.

Following the attacks in Paris and the subsequent UN resolution, Francois Hollande, the president of France, has visited the USA and Russia. In this issue we report on what has happened over the past two weeks and Mr. Hollande’s attempts to get countries to work together to defeat the IS.

In other parts of the world, Argentina has a new president, the remains of a tropical forest has turned up in the middle of the Arctic Ocean, and an eagerly awaited dinosaur auction disappoints. Scientists warn about picking up blue dragons and explain that it is not just migrating birds that have inbuilt ‘biocompasses’. 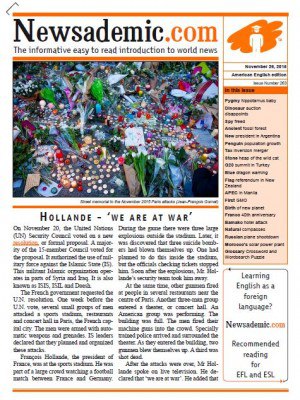